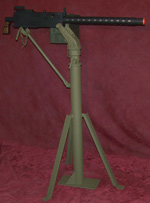 From the stagnant trenches of World War I to the sweeping battles of World War II, from the frozen landscapes of Korea to the fetid jungles of Vietnam and every action in between John Browning's .30 machine gun has accompanied America's Soldiers, Sailors, Airmen and Marines through hell...and back.

The legendary history of Browning's .30 Caliber machine gun began to unfold when it was demonstrated in May 1917 at the Springfield Armory proving grounds. After firing 40,000 rounds without a malfunction at six hundred rounds per minute, the water cooled machine gun had stunned the military and government observers. Some refused to believe their own eyes.

To persuade the doubters another demonstration was held where Mr. Browning fired the gun for forty eight minutes without stopping, once again there was no malfunction. The weapon, designated M-1917, was recommended for immediate adoption by the Army and the storied history began.

After World War 1 the army realized the need for a lighter more mobile weapon system and Browning's M-1917 was modified into an air cooled version that became,